Elvis Crespo was named after Elvis Presley, has won a Grammy, and was the 1999 Tropical: Male Artist of the Year ... what have you done that is half as awesome? Elvis is a merenegueteno (creater of merengue music) and has been making danceable music since his debut in 1998.

Merengue is probably the simplest of the latin dances because of it's basic 4/4 beat. It's relative fast pace and simplicity allow some flexibility on the dancefloor.

So grab your better half and give it a shot ....

Song of the Year

It's fun to pick an indie or obscure track for song of the year. Makes me look smart and well informed. But when Ravens defenders are declaring that they went to Ball So Hard University and Jay-Z and Kanye are repeating one song ten times at their shows, there's really only one choice.

The song of the year is Niggas in Paris:


No lists this year, I just wasn't paying close enough attention. But if I did make a list the M83 album below would be right at the top. 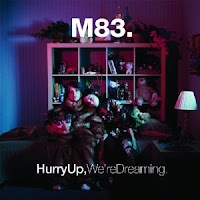 One of my favored electronica acts, M83, released a new double album a little while back. Hurry Up We're Dreaming is a sprawling epic, touching a little bit of everything in M83's past: moody lyric-less soundscapes, slow building jams, and blowout dance tracks. The title feels appropriate; this stuff could easily be the soundtrack to your dreams. Here's a taste:


Echoes of Mine (part of it anyway):

And what the hell, here's my favorite track off of Saturdays=Youth, their last release before Hurry Up:

Deltron 3030 is a great hip hop album. From THE YEAR 2000. So we're either going backwards or forwards in time. Expand your mind, sucka.
This from Wiki: "The album's story casts Del in the role of Deltron Zero, a disillusioned mech soldier and interplanetary computer prodigy rebelling against a 31st century New World Order. In a world where evil oligarchs suppress both human rights and hip-hop, Del fights rap battles against a series of foes, becoming Galactic Rhyme Federation Champion.Del tha Funkee Homosapien's lyrics veer from serious social commentary to humor to epic sci-fi battles, while producer Dan the Automator creates an eerie and dense atmosphere.The song "3030" was used as the theme song on the short lived CBS series Robbery Homicide Division. The song "Positive Contact" was featured in the video games Mat Hoffman's Pro BMX (2001), Tony Hawk's Underground (2003), and College Hoops 2K8 (2007).The song "Time Keeps On Slipping", featuring Damon Albarn, is said to have been the influence on the creation of the Gorillaz.[citation needed]On the single "Time Keeps On Slipping", it states the version of "Turbulence" is the remix by Mark Bell, despite the fact the album version and the version featured on the single are completely different. The version on the single could possibly be the original version, as it features scratching possibly by Kid Koala, which is missing from the Mark Bell remix on the album.[citation needed]The album was reissued July 1, 2008 with 3 bonus remixes."
Posted by Gabe Calhoun at 1:32 PM No comments:

Don't have a ton of time to post, but I've got some epic jams to share. Pendulum hails from the land down under and offer some rather unique tracks. They have a diverse sound, with tracks off of their album Immersion ranging from dubstepesque to pop to punk etc. etc.

Here are the highlights off of Immersion:

Love the aussies ... one of these days I am going to make an Aussie top picks post
Posted by Steve P at 3:32 PM 1 comment:

I thought I'd jump back into the TSAD fray by discussing a couple of bands that, while they've been on the blog before, deserve a little more of our time.

First up is J Roddy Walston and the Business. Steve mentioned them briefly in one of his ACL previews. I love this band. Fantastic blues rock. J Roddy is like a modern day Jerry Lee Lewis, pounding his piano keys while rocking out with a band that gives his songs one hell of a thump. It's the sort of stuff that Ben would describe as "rootsy" (possibly the highest compliment he can give a band) and the kind of stuff I would have featured in my erstwhile "Where has all the real rock gone?" series had I known about them back then. Drink it in:


Next we have The Go! Team. Gabe posted an NFL commercial featuring one of their songs (all of the Play 60 commercials I've seen use Go! Team songs). These guys had a critically acclaimed debut album back in 2004 and have cranked out a couple more albums since then. I don't particularly care for the cheerleader-style vocals; I'm here for the rockin instrumental tracks. Here are a couple:

Bust Out Brigade:
The Go! Team - Bust-Out Brigade by thegoteam


And one for Nate:
The Go! Team - Apollo Throwdown (Star Slinger Remix) by thegoteam

Websites:
J Roddy Walston and The Business
The Go! Team

Happy Friday.
Posted by Stew C at 5:00 AM No comments: