but really with the kryptonite song aside, watch this embedment.


that was a blaisdale pic
Posted by miller at 1:19 PM 2 comments:


If Black Sabbath reunited and made an album tomorrow, the result would be Wolfmother's first album. The monster riffs, plodding style, high pitched vocals, and dramatic imagery reminded everyone of Sabbath and Zeppelin, and that is most definitely a good thing.

After the first album things got a little difficult. Stockdale (guitar/vocals/the whole reason to listen) kicked the drummer and bassist, which is to say everyone else, out of the band, recruiting some new blood in the form of Ian Peres, Aidan Nemeth, and Dave Atkins.

Cosmic Egg, Wolfmother's new album, is a little bit less of an anachronism than their first effort. Something about the sound and feel of this album, together with the presence of an additional guitarist, seems more modern. The riffs continue to kick ass, and the songwriting is stronger than before. It's another glorious example of heavy metal as it was at the beginning. Check it out.

Wolfmother on Amazon
P.S. If you pick up Cosmic Egg, I highly recommend the Deluxe version. Four more tracks means 20 more minutes of rocking.
Posted by Stew C at 9:00 AM No comments:

My current obsession. I really should have seen these guys in concert when I was out in San Francisco. Check out that drummer!
Posted by Stew C at 12:58 PM No comments:

With the 5th Pick in the Chapelle's Show Racial Draft "The Asian delegation choose the RZA, the GZA, U God, Inspectah Deck, and Ghostface Killa....the Wu-Tang Clan!"

Possibly the best skit ever. Possibly the best Rappers ever. Wu-Tang is back under the leadership of Raekwon the Chef. The album is titled Only Built 4 Cuban Linx, Part II. By the way, Part 1 (1995) is sensational. Here, production is provided by the RZA and Dr. Dre. For Wu-Tang purposes, I'm partial to the RZA beats. If you're acquainted with Dre, there's one song in particular that has his fingerprints all over it. I challenge you to find it. The album as a whole is classic Wu. We've got out-of-control imagery, "the ruggedest beats", and nightmarish hood scenarios. I've given up on attempting to determine the extent to which any rapper actually lives that life. The great thing about Wu-Tang is that the narrative is so immersive that you don't even care. Raekwon is a great rapper, the crew remains rock solid. Just listen...
Konichiwa, Bitches.

Posted by Gabe Calhoun at 10:43 AM No comments: 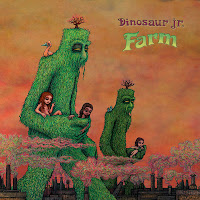 Guitar Heroics Anyone?
Dinosaur Jr. are old school. The band released their first album in 1985, foreshadowing the grunge phenomenon, and their most successful and critically acclaimed albums were released between 1987 and 1991. But to be honest I had never listened to them until this album came out. They took a ten year break before releasing Beyond in 2007 and Farm this year. Thank God they came back.

To put it simply, this album features the best guitar work I've heard all year. If you're looking for some face melting solos to brighten your day and get your head nodding, look no further. The songs aren't bad either. Actually, they're quite good. Definitely grungy and heavy, with lyrics that support that style. And they're on tour. Apparently they already played the Vic here in Chicago, and I was sad to hear it. But hey, now I know. And my music library is the better for it. Check out the tracks below, and if you like what you hear, pick up their disc. It's worth the purchase just to hear I Don't Want to Go There.

A short while ago the Avett Brothers’ music came to my attention. It was love at first listen for me, and perhaps the only reason that it has taken me so long to post on them is that I have too busy listening. Those of you who know me and my musical tastes will take one listen to these guys and know that their tunes are right in my wheelhouse. Their unbridled talent and raw energy have really blown me away.

*Be sure to watch at least the first track on this video; I know its a long one. Its worth your while though; you're just going to have to trust me....

Since 2000, the Avett brothers have released a lot of music, turning out over one album release (including live albums) per year. Their bluegrass/Americana music incorporates many different elements and influences. Country, punk, folk, rock, and ragtime tones are very apparent in their offerings. They released an album last week, “I and Love and You”, I haven’t heard all of it yet, but what I have heard has been excellent.

For those of you in the Madison area, they are playing the Barrymore Theatre on 10/21. I heard that all of the cool kids are going to be there.